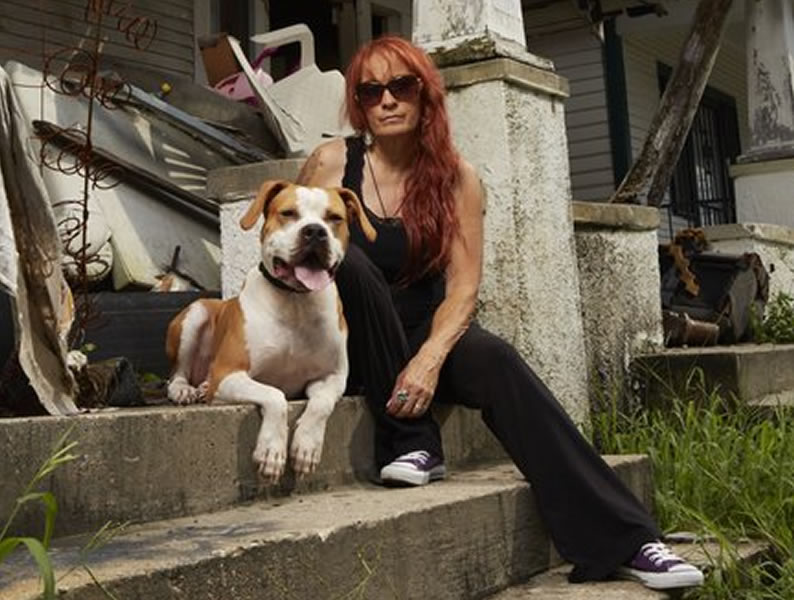 Tia is the founder of the Villalobos Rescue Center and host of the hit show “Pit Bulls and Parolees,” which follows her inspiring rescue, training, rehabilitation, and placement work. She attributes her determination to that of all the animals she has had the honor of meeting and learning from. Tia says it was the compassion and understanding she received from animals of every size, shape, and species, that made her the human she is today.

Her love for animals started with a love of horses. She became an avid equestrian in every genre of horsemanship. Her Mother taught her discipline and very strong morals, and instilled in Tia that it is a privilege and honor to own any animal as a “pet,” and that when you take on the responsibility you must be willing to put the animal’s needs first. Tia has continued this tradition with her own children and their animals are treated like royalty!

As a young adult Tia took in a wolf/dog mix – or “wolfdog” – that a relative was giving up. Tia says “the magnificent snow white ‘beast’ took me on a journey that I would never be able to re-pay him for, my life with wolves began.” Wolfdogs were a current trend, but few people were equipped to adequately care for them, so sadly many were being given up or worse. Tia’s captivation with her own wolfdog was the impetus that led her to rescue other wolfdogs – and it was then that the Villalobos Rescue Center (“village of wolves” in Spanish) was born.

Years later on a chance visit to a local animal shelter, Tia discovered her first pit bull “Tatanka,” she had been confiscated from a double homicide/methamphetamine lab crime scene. Tia says that taking her in would ultimately prove to her that rescuing wolfdogs was a walk in the park compared to what she would go through with the most notorious breed of dog in the world.

It was the early 90’s and pit bulls were the most unpopular breed in the country, shelters were euthanizing them and only rarely adopting them out. Tia says that to call her rescue efforts an uphill battle was putting it mildly. Between the wolfdogs and the pit bulls, life at Villalobos was tough. Tia was approached by the City of Los Angeles to form a training program for all pit bull owners. Over the years the weekly obedience classes proved highly successful for hundreds of thousands of dogs and their owners. The classes went on for 11 wonderful years until Tia and Villalobos relocated to Louisiana.

Once in Louisiana Tia was given an opportunity to work with exotic animals in the film industry. She says that work, which took her all over the world and advanced her dog training skills, also made her realize that the animals themselves would prove to be the most invaluable mentors one could ever ask for.

Soon after, she took a chance on hiring a young man who was recently released from prison. He would turn out to be the start of something very big for Villalobos Rescue Center. At first, having a parolee on board seemed only to add to the stigma of owning pit bulls and wolfdogs. But a well-known magazine in Los Angeles wrote an article about the hard yet rewarding work they were doing. In 2007, Tia and Villalobos were voted one of the “Most Important People of Los Angeles.” It was then that their lives took an unexpected turn.

Production companies began contacting Tia about doing a reality show. She initially had no interest in such a project, but times were hard for the non-profit and donations were scarce. Tia says that hunger eventually won over her pride and she gave in to the idea of documenting their lives on national television. “Pit Bulls & Parolees” was born under the protective arms of Animal Planet.

Tia is extremely grateful for what they have accomplished through what she describes as a successful and “real” reality show. Through the show they have been able to survive and save more dogs than ever before. Tia adds, “But what is also so important is that we’ve been able to show that being the ‘underdog’ is all about being strong, resilient, tenacious, loyal and yet forgiving. Wait a minute … I think I just described some of greatest dogs in my life.”

We are excited to have Tia as a member of the Victoria Stilwell Academy dog training school advisory board!

Join Victoria for the online dog training event of the year: